If there’s a day devoted to “tradition” or “Christianity” or “family,” the Godless, bitter left has to try to ruin it.

They never succeed at this sabotage game they play because they’re in the minority with this “woke” atheist culture, but they’re loud about it, so it feels like they have more power and sway than they really do.

One of the most destructive parts of the progressive culture is toxic feminism. It’s so angry, nasty, and vengeful. There’s nothing empowering about it. It feels like a bunch of insecure, naggy women, lashing out because they feel inferior to men and scared of them, to boot.

That’s feminism in a nutshell: lost women, who don’t feel confident in themselves, pretend that empowerment is about tampons and abortions, and turning men into weak, hapless soy babies.

If you have to tear someone else down to lift yourself up, I’m sorry to tell you this, but you’re a fraud.

And speaking of frauds, on Easter Sunday, D-list actress Alyssa Milano took to Twitter with a bitter/hateful and insecure “feminist” message for men… and trust me, it backfired spectacularly right in her face.

Here’s what Alyssa said: “Can we stop saying to our sons things like: “take care of your mother while I’m gone.” This is insinuating that women can’t take care of ourselves. And it’s bullshit.”

Can we stop saying to our sons things like: “take care of your mother while I’m gone.”

This is insinuating that women can’t take care of ourselves. And it’s bullshit.

The backlash was swift and harsh:

“More attacks on masculinity. Just because a male protects you doesn’t mean you’re any less of a woman.”

“It’s a simple suggestion of good faith. It’s good to hear you actually know mothers are women, though lol”

“I was going to visit my mother today in the nursing home, but Alyssa thinks that’s sexist.”

“Like that time you called police (who you wish to defund) to come see about something dumb? Sons can and should be raised to look after their family. That’s a good thing.”

“Feminists are a cancer”

“This tweet proves you don’t know how to take care of yourself. Certainly not babies that you like to kill. You’re so sick and twisted you think abortion is some powerful, endearing trait. No. You’re just a weak, fragile, sick hollow woman.”

“This chick must be so utterly and completely miserable inside.”

“If you’re taking parenting or ANY kind of advice from @Alyssa_Milano, PLEASE do the world a favor and don’t have kids.”

“I have two boys, and I freakin love every second of them protecting and taking care of me. Father is stay at home dad and I am the breadwinner making top 5%. I take care of myself, but they protect me. How it should be.”

“you are a complete idiot, by saying that does not imply a woman can’t take care of herself. A father is teaching his son about Chivalry toward woman, especially his mother. It’s called raising your son the right way.”

“Son, don’t ever let your mother be a leftist” 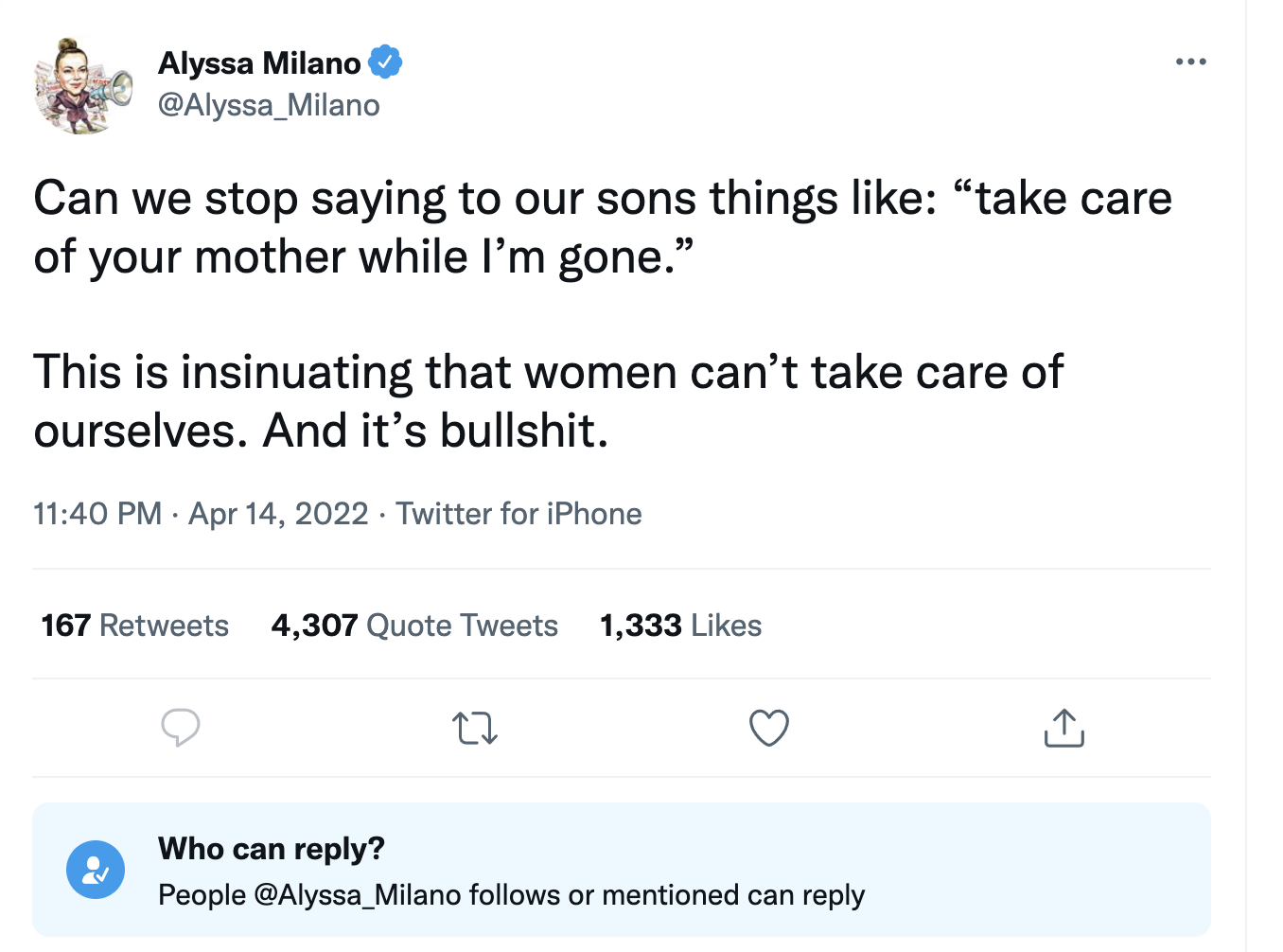 Alyssa is so strong and independent that she had to turn off the responses to her tweet. LOL

These people are such scared, insecure frauds.

Mock them every chance you get.