Democrats’ 2024 Dumpster Fire: If Not Biden, Then Who? Candidate #1 The President that the liberal media once declared the most popular of all time – Joe Biden – has turned into the least popular one in a span of just one year. And while some in the media are determined to go down with the ship, most are looking for a way out.

The method or choice to get rid of Biden has been agreed upon: Joe is old.  Now, if you are a CNN viewer, you must believe Joe aged much faster in one year than any normal human.  Just last year, mentioning Joe Biden’s age and mental acuity (or lack thereof) was tantamount to inciting an insurrection.  But apparently, the media has just learned that a 79-year dimwit is not going to get any smarter once he turns 80.

That curious phenomenon has left the Democrats desperately searching for a new contestant to carry on the far-left torch. Don’t be mistaken in thinking that the Democrats are giving up on the very same policies that sank Joe Biden. The goal is to keep the policies intact but find a much more appealing mouthpiece.

Gavin is a younger, sleeker, perkier version of Biden who can read a teleprompter at a 5th-grade level and ride a bike without training wheels. There is one small problem, however: Gavin’s main gubernatorial achievement is driving more people out of California than Putin managed to drive out of Ukraine by bombing the civilian population:

However, in the Democrat party, monumental failure has never been a career-limiting move. For example, Susan Rice, who bungled American foreign policy under Obama, is now in charge of Biden’s domestic agenda. The Democrats’ goal is not to fix the damage done to the country, and hence, Susan Rice is not going anywhere. The goal is to fix “the messaging” – and nobody does “messaging” better than Gavin Newsom. Because he is now running for President, he is re-branding his California “vision” to be more palatable for the general electorate.

For example, Gavin discovered that in places other than California, being “pro-life” is a thing. So, in a stunning act of cultural appropriation, Gavin just declared himself “pro-life.” How so? He claims that you are not truly alive unless your every need is covered by the state of California. Here is Gavin explaining his massive socialist scheme that includes, among other things, requiring his loyal subjects to pay for abortions, health care, and universal pre-K for illegal immigrants that Biden is flying to their state:

In the same speech, Gavin extends his definition of “pro-life” to his Covid policies.  He brags that because he shut the state down for the sole purpose of getting a faster reservation at French Laundry, Covid mortality in California is so much lower than in places like Florida. It must be noted that adjusted for the age of the population, and the number of young people dead of suicide and drug overdose, California’s handling of Covid is disastrous compared to Florida.  And that does not even include the economic devastation, where California is lagging far behind the rest of the country.

Gavin Newsom conveniently omits all that.  He is also leaving out the fact that back in the day, his party declared that freedom is for dummies:

That ad created such a stream of revenue for Ron DeSantis’ reelection campaign that Gavin decided that “freedom” is a useful term to throw around. Here is Gavin making a cameo appearance on conservative networks, explaining to California ex-pats that the whole thing was a big misunderstanding.

To help Gavin Newsom in his quest for the Democratic nomination, RWR created his next campaign video: 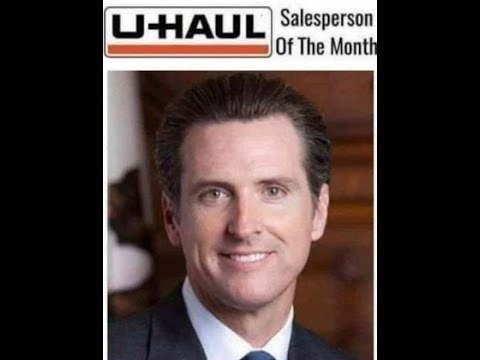